Following a career in banking, Angela Davis changed her career path to incorporate her interest in engaging in community service. She now works for the Illinois Department of Human Services (IDHS) in the Family and Community Services division as a Human Services Caseworker. In her role at IDHS, she specializes in determining Medicaid eligibility for individuals needing long term care benefits in a skilled nursing or supportive living facility and assists with processing payments to the facilities. 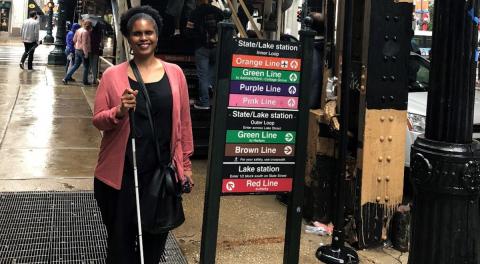 Angela was diagnosed with Retinitis Pigmentosa (RP) at age nine and, over time, experienced a profound loss of vision. She received a bachelor’s degree in African American Studies with a concentration in Economics at Northwestern University in Illinois. Her career spans banking services, transportation and logistics, and mental health. Through each position, Angela has strengthened her client services skills, which prepared her for her current career opportunity.

In addition to her work, Angela has volunteered with Second Sense, a nonprofit organization that provides services to blind and low vision individuals, and on the Chicago Transit Authority’s (CTA) Americans with Disabilities Act (ADA) Advisory Committee. During her four-year term on this Advisory Committee, she helped provide recommendations on compliance for CTA, facilitated dialogue between CTA and the disability community, and explored ways to increase the use of the CTA’s services by people with disabilities. Angela served as chair of this committee during the last year and a half of her service.

In adapting to her vision loss, Angela began using a white cane and transitioned from magnification to screen reading technology in her early forties. Her job accommodations at IDHS include a laptop equipped with JAWS. This screen reading software allows her to accomplish all her electronic job duties like checking emails and other online applications. When she began working for IDHS, she had to learn how to use WebEx, a virtual meeting platform. Not familiar with the WebEx environment, she had to quickly learn how to navigate the application with JAWS. She asked trainers to explain the demonstrations verbally, and utilized her listening and auditory skills to learn how to use this platform. For handwritten documents and applications not compatible with screen readers, Angela has a reader to assist her in accessing the information.

Outside of work, Angela loves audio described programming like television, movies, and live theatre. One theater in her town offers enhanced accessibility services before the start of a performance. Blind and visually impaired patrons can touch the costumes, receive a description of the set and stage layout, and talk with the actors. This activity has allowed her to find an innovative way to enjoy old pastimes.

With the uncertainty around an RP diagnosis, Angela has learned to adapt to change over the years. She often experiences worry or anxiety about maintaining independence or navigating new technologies. However, she is reminded that worry only stops her from enjoying the present moment and celebrating current accomplishments. Angela’s advice is to keep moving forward, be patient, and have faith in yourself.