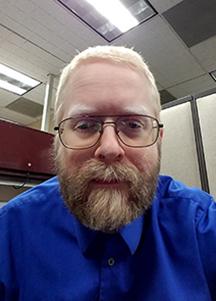 A childhood love of drawing opened the door to a lifelong career for Michael Kitchens. As an engineering computer-aided design (CAD) technician in the Chesapeake Virginia Department of Public Works, he spends his days working on engineering projects for the city.

Michael was born with albinism, which affects his eyesight. He has low vision, consisting of rotary nystagmus (meaning he can’t keep his eyes still for extended periods of time), near-sightedness, and light sensitivity. He uses a white cane on as as-needed basis.

As a child, Michael loved to draw. After noticing that Michael was spending hours sketching pictures of roads, buildings, and floor plans of houses he’d lived in, his family encouraged him to pursue his passion for drawing. He enrolled in drafting classes while still in high school and decided to pursue drafting as a career.

Education played a big part in Michael’s career-success story. Before starting college, he attended a college-preparatory program provided by his state rehabilitation center. He then went on to a community college and a technical college, where he earned two associate’s degrees in computer-aided drafting and design.

In his current role as an engineering CAD technician, a position he has held for the past three years, Michael puts his education and drafting skills to use for the City of Chesapeake. He works on a variety of engineering projects that improve the way the city functions. Michael’s work focuses mainly on stormwater maintenance and improvement, but he also does projects on right-of-way and easement acquisitions. 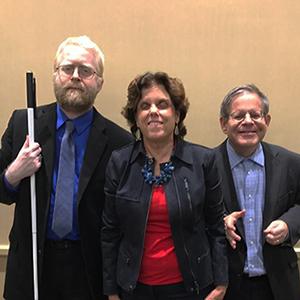 At work, Michael uses large screens and keeps his desk well-lit. He uses a pocket magnifier as needed and sometimes views marked-up drawings on screens instead of printed out.

In his spare time, Michael enjoys attending church activities and spending time with family. He is also an active member of the National Federation of the Blind (NFB), NFB’s Virginia affiliate, and the local NFB Tidewater Chapter. He enjoys attending NFB national and state conventions when he can.

Michael recommends that young people with visual impairments network with professionals in their career of interest. He believes that networking has played a key role in his career, with former coworkers helping him secure new job positions.

He also encourages young people to work with their local vocational rehabilitation agency and blindness-advocacy organizations (like NFB) to build a “toolbox” of skills. For example, Michael is currently learning to read braille, which will add yet another skill to his toolbox and further pave the way for career success.