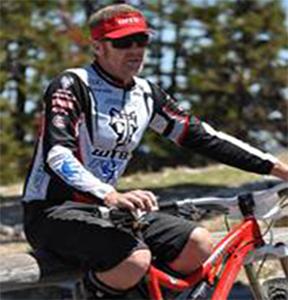 Bobby McMullen has made a career as a downhill mountain bike racer after being a champion alpine skier. He was a high school sports star in spite of being diagnosed with Type 1 diabetes at age 12. Bobby received a degree in Political Science from Weber State University in Utah where he skied for the Wildcats ski team. During his first year of law school in Northern California in 1993, Bobby lost his vision as a result of complications of diabetes. The loss was sudden. He was blind in a month. Undeterred from pursuing his love of competitive sports, Bobby learned to ski with a ride guide system. The guide rides in front of him and calls commands. Within a year he qualified for the U.S. Disabled Ski Team. He spent seven years as a member of the U.S. Team, was a two-time U.S. Disabled Overall Downhill champion, and earned his spot on the Nagano Paralympic ski team. 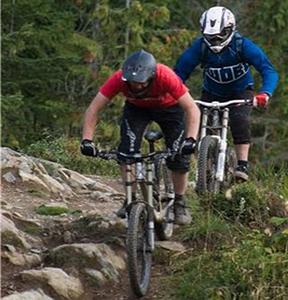 Through his ski career, McMullen used cycling as a means of conditioning balance, strength, and endurance. He worked with riders to develop the ride-guide system in mountain bike riding. Since 2004, Bobby has raced in at least 25 downhill, cross-country, and 8- and 12-hour mountain bike events each year. He is an inductee to the National Athletes with Disabilities Hall of Fame, and current nominee to the Mountain Bike Hall of Fame. McMullen shares his life experiences and inspiration with audiences worldwide as a sought-after keynote and motivational speaker.