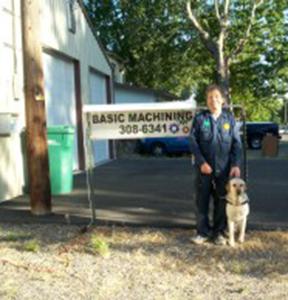 Bernie Vinther, who is totally blind, is the owner of Basic Machining and Electronics in Kennewick, WA, and a full service machinist. He operates all kinds of manually controlled machines such as a lathe, milling machine, drill press, band saw, grinder, and stationary sander.

He runs what is referred to in the trade as a job shop, doing all kinds of jobs that people bring his way, but he also does contract work and is currently concluding a military contract. He supervises 2 other machinists. Bernie started in a two car garage and recently opened a shop 4 times as large. He usually hires college students because he is so dedicated to educating students in this business. He used to be a skilled electronics technician in Western Washington, owning a business that specialized in industrial communications systems, but the diabetes that began in childhood worsened. At age 38, his sight began to diminish, marking the end of his chosen career. Vinther's desire to work with his hands led to an interest in machining. He enrolled in machine-shop classes at Columbia Basin College in Pasco, WA where he received an AA degree as a machinist. Bernie uses Braille and cutting edge technology including JAWS, a speech program that gives him access to computers. Using a Braille printer, Vinther has labeled all of his cutting tools. He created a multipage drill-size index in Braille so he knows which tool to use, in both metric and standard sizes. 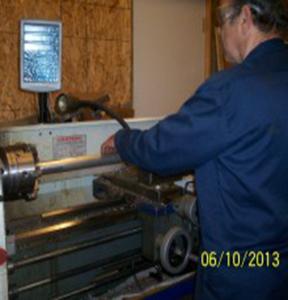 Obviously a job that involves high levels of accuracy, Vinther's assistance comes from an audio readout device that tells him the precise measurements and positions on his lathes and milling machines. By attaching the device to each machine's digital display, he hears the information he needs. He can then make necessary adjustments to as close as one ten-thousandth of an inch.